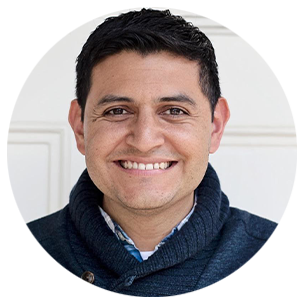 Book A Speaker Explore All Speakers

Marcos Canales, originally from Costa Rica, has been pastoring amongst the Latina community of the greater Los Angeles area for more than a decade. During this time, he has also worked with non-profit community organizations in the areas of youth development, mentoring, and immigration advocacy. He has also been a leading strategist for the Center for the Study of Hispanic Church and Community (Centro Latino) at Fuller Theological Seminary and an adjunct professor at various theological institutions. He received his Master’s of Divinity degree from Fuller Theological Seminary and he loves to integrate Christian discipleship, social justice and Latina theology. Currently, Marcos is the pastor of La Fuente Ministries- a bilingual, intercultural, and intergenerational congregation of Pasadena First Church of the Nazarene. He is married to Andrea, who is a clinical psychologist, and they are raising Elias, their son, in the city of Pasadena, California.

View all posts by Marcos