Read our latest research about having better conversations with teenagers in this post.

That’s how many parents describe their interactions with their teenage children. Gone are the days of easy, playful talks. They’ve been replaced with stressful experiences of “walking on eggshells” around adolescents in the home.

Many parents are familiar with seemingly random angry outbursts, or the opposite: cold withdrawal, triggered by what they think of as innocuous questions and comments. Where did the sweet, kind, and lovable child go?

Chances are good that kid is still in there somewhere, just harder to find amid the conflicts brought on by the physical and emotional changes of puberty.

Our children’s communication with us changes all throughout their development, but early adolescence often marks a turning point.[1] These changes are affected by the dynamics of the parent-teen relationship. My daughter Yumi and I addressed this in the first article in this three-part series, Preparing to Converse: At Baseline.[2] We then focused on how parents can initiate communication to increase the likelihood of receiving meaningful responses from their teenagers in the second article, Initiating Conversations: Serve.[3] In this last article of the set, we will concentrate on how to move toward a continuous dialogue that builds the parent-teen relationship.

Many of my friends tell me that they have one-sided conversations where parents talk and kids (sometimes) pretend to listen. But with their friends, it seems easy to share thoughts and feelings about all kinds of things.

Why the difference between these two conversations? When they talk with their friends, teenagers feel understood and accepted. Maybe this is because they are coming from the same generation and culture. They’re also all in the process of figuring out who they are, what they like, and what they want in life. Being on equal terms helps them to feel more comfortable with sharing; one teen doesn’t have authority over another.[4]

But when teenagers talk with their parents, they often feel controlled. They’re afraid of judgment and consequences. Who would want to share openly in that kind of environment?

My favorite part of tennis is to “rally” with my friends. Instead of playing to score against the other person, we try to keep the ball going back and forth as long as we can. It’s really fun to play continuously rather than to compete against each other, starting over after each winning point. In conversations with their kids, parents can take cues from this “rally” approach. Instead of persistently making their points and trying to force their kids to accept them, parents can initiate conversations where response is more natural.

For example, the only acceptable answer to a forced “Do you understand?” is “Yes,” no matter what we think on the inside. This kind of communication isn’t helpful if what parents want is an ongoing conversation with their kids. Instead, if parents approach their kids with a question without an agenda, it can lead to an open exchange of ideas. A parent might begin a conversation by saying something like, “I just saw this YouTube video…What do you think of it?“ and maintain the “rally” by being open to hearing their kids’ opinions.

I can understand that it might be worrisome for parents to hear some of the comments and see some of the behaviors of their teenagers, but they are often just exploring different ideas and values. If parents communicated with their teenagers by listening more and talking less, their kids might make more effort to respond to parents’ approaches, leading to true sharing of thoughts and feelings.

As I read my daughter’s reflections, I am reminded of James 1:19, “…everyone should be quick to listen, slow to speak…”[5] James focuses on practical realities of life, and this instruction is particularly helpful for parents to follow if we want to have dialogue with our teenagers. If we remind ourselves that listening is the point of our conversations, we might be able to enjoy a good “rally” with our kids.

Philosopher Epictetus is attributed with the following axiom: “We have two ears and one mouth so that we can listen twice as much as we speak.” Is this what you do? As we practiced in Part 1 and Part 2 of this series, it is worthwhile to monitor what you do so that you can target specific behaviors to change for the better. This time, we invite you to digitally record some conversations with your teenagers and notice how much you speak and how much you listen.

This idea of recording yourselves may feel very uncomfortable, but it is a powerful method for discovering what occurs in your interactions. You may have had the experience of going to a retreat and at the end seeing a video montage of the weekend. You have the opportunity to see the experiences of the retreat through different eyes. I encourage many of the families I work with to video- or audio-record their interchanges in order to have a clearer picture of their relationships. We all have subjective filters through which we see and hear one another. These filters become darker – making it more difficult to see, hear, or remember – the more emotionally charged we become in a conversation. Recording our interactions can clarify these filters so that we have a shared reality from which to begin working on our relationships. Most mobile phones are equipped with great recording capabilities that make this easy. Before you begin recording, let everyone know that you are doing this in order to better understand how you communicate, particularly how well you listen.

Family members might initially be very aware of being recorded, but often within seconds everyone forgets and behaves as usual. Later, listen to what you have recorded. You might notice an inverse correlation between the quantity of your words and the quality of your conversations with your adolescents. The more you speak, the less they speak or listen, which leads to shorter conversation “rallies.”

In addition to listening, there are other factors that increase the probability that you will have a meaningful conversation with your kids. Rally begins with being ready at baseline and either serving or receiving a serve. In conversations this means we need to exhibit a genuine desire to know one another, demonstrate respect and love, and be available emotionally. Remember the purpose of initiating a conversation is to engage in a dialogue, not to win a point.

The following is an example of how a conversation can provide a moment of connection through a continuous “rally” of thoughts and feelings, or how it can deteriorate into disconnected monologues [described in brackets]:

Parent: How was your day?

Teen: Fine. How was yours?

Parent: Mine was good. I had a couple of hours to relax today, which I totally needed.

[Parent: “Mine was good too.” If this is all that the parent says, conversation can easily end here.]

Parent: Do you sometimes feel like you’re doing too many things and need time to chill like I did today?

[Parent: “Why now? What’s going on? Can I do anything to help?” These questions can feel intrusive to the teenager at this point, leading to possible shut down in communication.]

Teen: There’s too much stuff I have to do, like papers, tests, work, you know, the usual.

[Parent: “That’s nothing. If you can’t handle that, how will you be able to handle real life?” These comments minimize and deny the teenager’s experiences.]

Teen: I guess. Everything is due this week. I hate that teachers make everything due at the same time. Why can’t they space things out?!

Parent: That would be easier, huh?

[Parent: “You need to learn to deal with this better. Life doesn’t work the way you want it to. If you had listened to me and planned things better, you would not be in this mess now.” While what the parent says may be true, she no longer has a conversation partner.]

Teen: I take it one step at a time.

[Parent: “That’s not enough. You need to have more specific short-term goals to get you where you want to go. This is what I do when I have a lot going on at work. I first…blah blah blah.” If the teen wasn’t stressed before, he is stressed now, having had this very frustrating, unhelpful, disconnecting interchange with his parent.]

The difference between the two types of communication depicted above lies partly in the context of the relationship. One is based on mutual respect and affection that is heard beneath the conversation, whereas the other is based on frustration, irritation, and hurt. The relationship itself is important to the various forms of parent-teen communication. If there is a wall of anger between parent and teenager, it is important to first work on bringing down that wall, one issue at a time.

Other ingredients of this conversation that engender connection include: (a) having a purpose for the communication – to know, understand, and connect with her adolescent; and (b) investing time and attention to track her teen’s thoughts and feelings in order to really hear and affirm him.

The importance of being open and willing to hear your teenager’s thoughts and feelings—whatever they may be—cannot be overstated. Once they feel heard in the relationship, they can open the door to a “rally” that is enjoyable and meaningful for both parents and kids. On the other hand, if “let’s talk” is code for “let me tell you what you are doing wrong so that I can fix you,” no one wants to sign up for this. Especially teenagers.

One more thought about tennis as we close this three-part series: A match begins with “love-love,” meaning both sides have no score. The Oxford English Dictionary states that this term may have come from a colloquial phrase, “for love.” Indeed, it is “for love” that we, as parents, pursue a connection with our teenagers through healthy communication and connection, not because they deserve it or they make it easy, but because we are called to be the kinds of parents who love – no matter what.

Unlock the potential of the teenagers you care about most

The teenagers in your life are searching for answers to their 3 biggest questions:

Who am I? Where do I fit? What difference can I make?

Kara Powell and Brad Griffin tap into new research to equip you with essential tools to relate to the young people you care about.

[5] James 1:19 (NIV) My dear brothers and sisters, take note of this: Everyone should be quick to listen, slow to speak and slow to become angry. 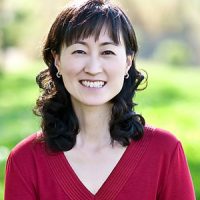 Dr. Susan Oh Cha is a licensed clinical psychologist with over two decades of experience working in various settings. She holds a doctorate in Clinical Psychology and a master’s degree in Theology from Fuller Theological Seminary. She co-authored Guest Pass: Access to Your Teen's World with her daughter, Yumi. In addition to private practice as a psychologist, Susan also coaches families through the college search and application process.