Unleashing youth as co-participants in the mission of God

Unleashing youth as co-participants in the mission of God

We hear it in countless books, convention keynotes and blogs: the North American church is in decline! Like a tired swimmer trying to just keep afloat, across the board churches are struggling in terms of participation, giving, faith practice, and church community life.[1] Yet even in the midst of decline, God is doing a new thing in our churches today: inviting us to see the mission of God and the role young people have in that mission in a new light.

When we get caught up in the mindset of stopping decline, we often look for any way to engage with the culture. Many churches turn to anything that could be considered cool, relevant, or authentic. The sad truth for a lot of our churches is that God is doing a new thing, which we often miss because we’re still waiting for God to show up in the old things that we’re trying to make more hip or more attractive.[2] Instead, we’re being invited to join what God is already doing with new imagination, passion, and creativity—and the young people entrusted to our care are at the center of this!

We live in what some have called an age of authenticity; a time where we put the highest value on what speaks to us as individuals the most, what feels cool, and what brings us the most immediate happiness.[3] Starting with the counterculture movements of the 60’s and 70’s, youth have played a major role in our culture determining what is cool. Unfortunately, since youthfulness is seen as a sign of authenticity, young people can unintentionally become like props to show how youthful, relevant, and authentic the church is. It’s almost like having young people in a church legitimizes that church’s cool factor.

The problem of this pull to authenticity—and our students’ role in it—is that it diminishes the central role of the mission of God in our churches. Young people start to believe that their place in the church is to make it feel trendy, and the mission of God becomes reduced to attracting people to programing rather than connecting them to a larger narrative or redemptive work.

How can we instead empower and encourage youth as we partner with them in the mission of God?

Here are five essentials to help unleash the passion and creativity of young people in your church:

When youth leadership is taken seriously, adults use their power and voice to give young people power and voice. Remember that some youth are more ready for this while others may need more encouragement to find and use their voice.

Great creativity and innovation begin with empathizing, which Brené Brown refers to as “feeling with someone.”[5] Empathy helps young people to see and feel, rather than assume, the needs in their churches, communities, and neighborhoods. Young people are more able to utilize their creativity and passion in alignment with the things in which God is already at work when they know to feel with the people in whom God is already at work.

With innovation that is driven by mission rather than excitement or cool factor, the work of God stays at the center. Sometimes when I get an idea that I’m excited about, I can get swept away. I often want to move straight to doing without pausing to wonder if it is something that God is already doing or something that I’m trying to do on my own. While empowering creativity and passion, youth workers and church leaders need to help youth look for where God is at work and keep their eyes on the mission of God.

4. Reducing the fear of failure.

The idea that something you built might be a disappointment can be paralyzing. Adults need to remember that young people, like all people, are going to mess up sometimes and need grace-filled ways of handling missteps and miscalculations. When failure becomes the chance to continue in new ways instead of a defeat, youth learn that their value is more than their successes.

Youth can often feel like there is no point in utilizing their creativity to help the church since adults are in control. The hierarchy of our church communities can encourage young people to assume that their opinions and ideas won’t matter if they bring them to the table. To truly empower young people to use their gifts, their contributions to the church must be seen as equal to other generations. This is definitely an easier-said-than-done situation. A youth worker can believe that a young person’s contributions are equal to others’—but until the rest of church leadership believes it, it will not be the case. In my experience, the way to start changing the way leaders see youth potential is to show them what youth have already done. This means that youth workers need to allow youth to take on load-bearing roles in their own ministry, which in turn can help others build confidence in youth leadership outside of youth ministry circles.

It is true that the North American church is in decline; yet this does not mean that God is finished with us. God is at work in our neighborhoods and communities, encouraging us to get involved with what God is doing. Often, we get so caught up in doing ministry to youth, we lose sight of the important truth that doing ministry with youth as co-participants might give the church the passion and creativity it needs to align itself with the mission of God.

This course explores what it means to be a Keychain Leader, showing you how to more effectively involve young people in leadership roles in your church—an essential shift for churches committed to engaging young people. Join Kara Powell, Brad Griffin, Jake Mulder, and Zach Ellis as they journey with you in becoming a keychain leader!

[2] In The Great Emergence, Phyllis Tickle lays out a beautiful argument for how God causes massive transitions in the church, which have happened approximately every 500 years. Tickle suggests that the changes in Western culture, as well as the ways that those changes have affected the church, create a time of great challenge for the modern church, but also great opportunity as God does a new thing in the world and in the church.

Tickle, Phyllis. The Great Emergence: How Christianity Is Changing and Why. Baker Publishing Group, 2012.

[3] With Faith Formation in a Secular Age, Andrew Root explores the beginnings of this age of authenticity as well as the ways in which authenticity has affected the church in North America has learned from culture.

[4] In Practicing Passion, Kenda Creasy Dean explains that youth ministry often lacks “wonder-producing, faith-provoking, life-altering acts of witness that [engage] young people in mission in their own right. Instead, youth ministry [relies] on adults’ participation in the Passion of Christ on youth’s behalf.” 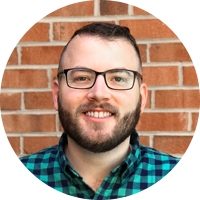 Jeremy Morelock oversees crib to college ministries and works directly with teenagers at St. John’s Lutheran Church just outside of Baltimore in Phoenix, Maryland. An MDiv graduate from Fuller Theological Seminary, he is passionate about researching and building ministries that help young people find their voice, agency and purpose. In his free time, Jeremy enjoys eating tacos and watching movies with his wife Sam.