Sending off a college student for the first time can spark strong—and competing—feelings. That’s certainly true for me this year.

As Nathan, our oldest, heads to college this fall, I’m so thrilled for all God has for him in this next chapter that feels so right and he feels so ready for. And yet at the same time I’m so sad for Dave and myself, and Krista and Jessica, who will miss him terribly. It’s hard not to be a mess on any given day in the midst of this emotional swirl.

Dave and I spent time this last year thinking about how to send Nathan off well. In light of the recent research I did for our new Growing With book for parents, I was especially eager to send Nathan with a few mementos to remind him of the friends and family who will still be with him even after he has graduated and is potentially a few thousand miles away. So we came up with two gifts that are so deeply meaningful, I wish that every student could take their own to college.

Gift 1: A visible reminder of the team that grows with them

All three of our kids have grown to love volleyball. They are tall, athletic, and don’t like aggressive shoving from the opposing team, which makes volleyball a perfect sport for the Powells. So Dave and I purchased a plain white volleyball to give Nathan on his 18thbirthday and drove it around southern California, getting signatures from the 30 or so adults who have shaped him. From aunts and uncles to youth pastors and guitar teachers, we wanted Nathan to have a permanent—and visible—reminder of the adults who were on his team.

In one of his college application essays, Nathan had to write a letter to a hypothetical future roommate, describing a possession that he would bring with him to college. He wrote about that volleyball, and the adults who had impacted him. 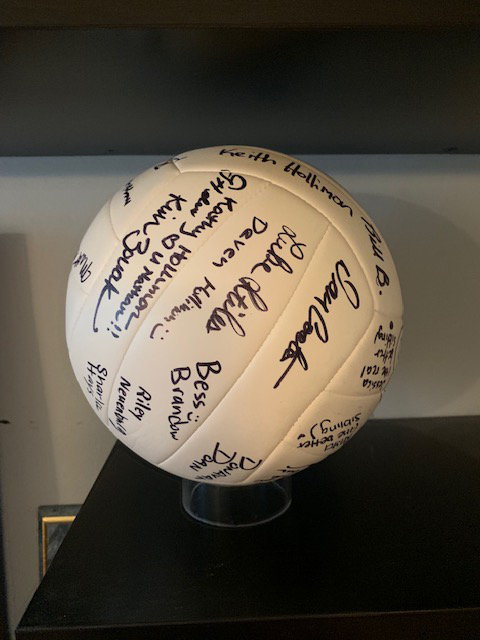 The volleyball is now perched on a $6 stand but its meaning to Nathan—and to our family—is priceless. It’s a tangible symbol that he sees every day—often multiple times a day—of the team that is still with him even though we are separated by a few thousand miles.

For Nathan it was a volleyball. Whether you will be preparing to say goodbye to a high school senior or staying connected with a newly-fledged college freshman this year, what symbol of a young person’s passions—a musical score, a special book, a blank canvas—could you turn into a visible reminder of the friends and family who cheer them on both now and in their future?

Tweet: What symbol of a young person’s passions could you turn into a visible reminder of the friends and family who cheer them on both now and in their future?

Gift #2: A spiritual reminder of the God who goes with them

As we prepared for Nathan’s high school graduation, Dave and I wanted the party we hosted in our back yard to have one primary purpose: to remind Nathan of the people who care the most about him. That purpose influenced:

The invitation list. In addition to family, we invited both adults and teenagers who had significantly impacted Nathan over the years.

The décor. We kept the flower and candle centerpieces simple, and surprised Nathan by surrounding them with a LOT of pictures of him.

Our blessing time for Nathan. Ahead of time, we suggested to Nathan that he invite five men to pray for him. He chose Dave and four men (ranging in age from 32 to 72) who have shaped him through adolescence.

My favorite part of the party, Scripture verses from Nathan’s “team.” Dave and I wanted him to head to college with a second—perhaps more prayerful and biblical—reminder of the amazing community that has formed him. So in our invitations, we asked folks to think ahead of time about a Scripture verse that had been significant to them that could also be significant to Nathan in this next chapter.

When guests arrived at the party, they were ushered toward our living room window on which we had hung a picture of Nathan and simple instructions to be part of his ongoing team. We asked each guest to write the following on one or more sticky note:

We left a stack of sticky notes, a cup full of pens, and a handful of Bibles at the foot of the window. Guests wrote 1-2 sticky notes each. Some guests wrote out full passages; others just the citation. Every guest wrote their name. 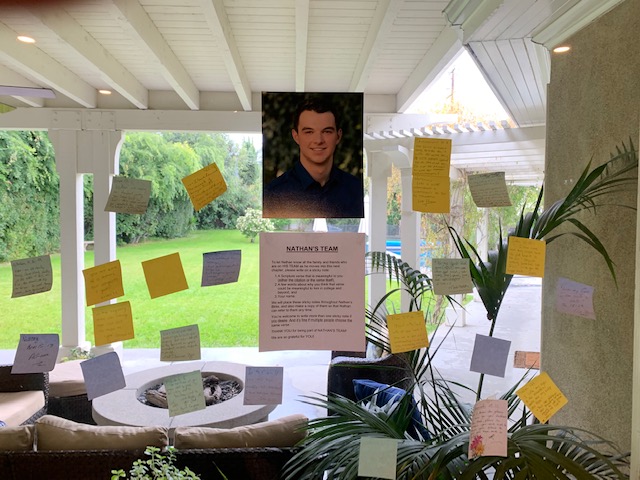 When the party ended, I typed up all the verses, with guests’ names, and put those sheets in a box where he’s kept encouraging notes, pictures, and mementos since he turned 13.

But the best part is I transferred each sticky note to its respective passage in Nathan’s Bible. Every time Nathan opens his Bible and flips through even a few of its pages, he sees a note from an important family member or friend who’s passing on a verse and a note of affirmation. Here’s one of my favorites:

“Ephesians 3:16-19. Nathan, you are already strong, Christ already dwells in you, and you are rooted. But at college, this passage is my prayer for you – for more! Stronger, deeper, roots beyond roots!”

Think about a young person in your own life on the verge of transition. How could you gather key Scripture verses, or central prayer themes, that are important for him or her and creatively present them to them now and/or as they transition to a next season?

And I’d love to learn from you: What other meaningful mementos have you used to send important messages about faith and community to young people you care about? 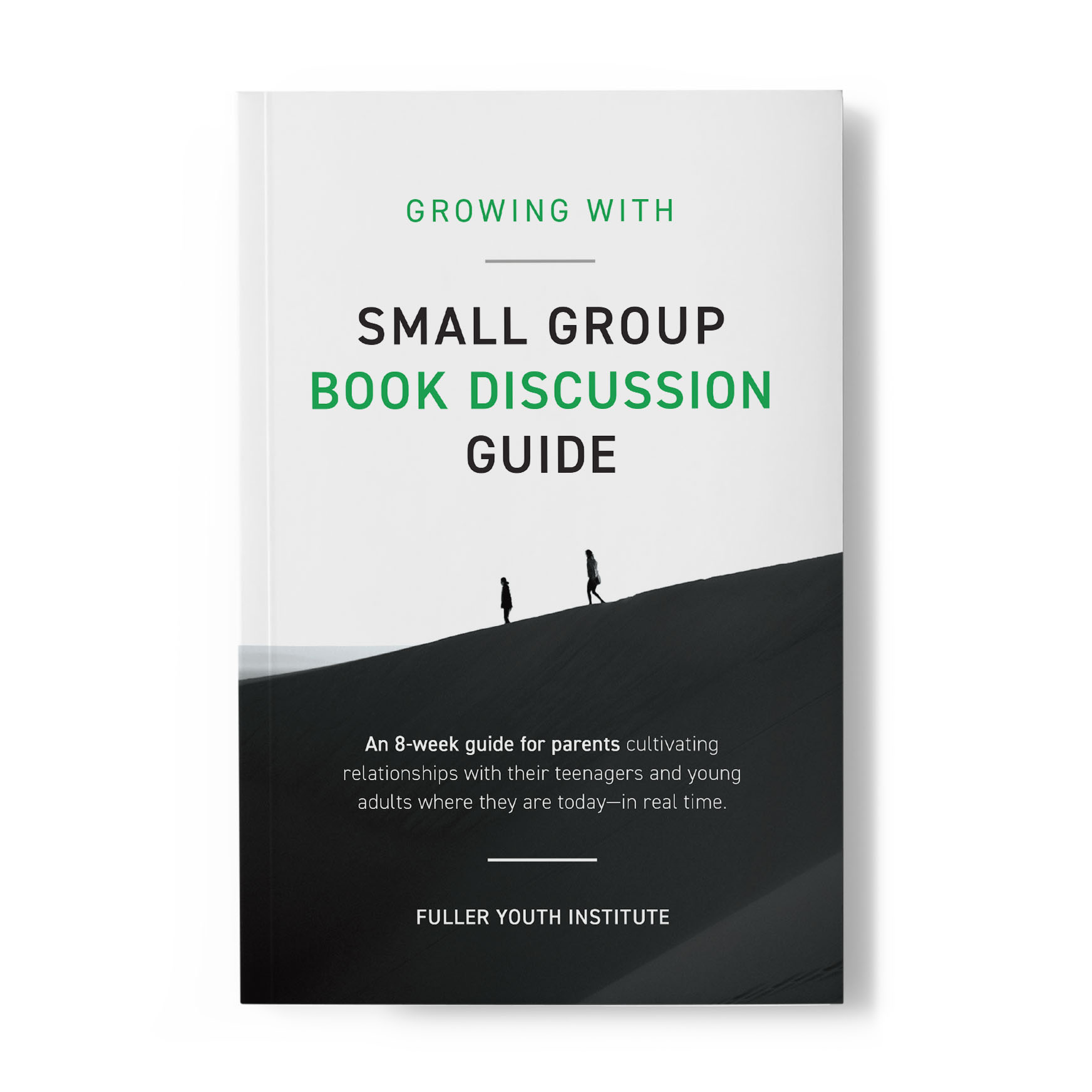 Our Growing With Small Group Discussion Guide leads parents on an 8-week journey, giving you questions to spark meaningful discussion with other parents, ideas to widen your parenting support network, and space for personal prayer and reflection. Order your copy today.