“The way stuff is today is so different than how it was in the Bible, and that’s why people can’t really relate,” my friend Karina proclaims as we read Proverbs together. She continues, “I like learning about the Bible, but it’s also been used to instill fear and make people do stuff. I don’t want to offend you, but it’s not always looked at in the best light.”

Her announcement didn’t surprise me.

When I decided to attend Fuller Seminary it wasn’t necessarily because I wanted to become a pastor or get a job in ministry. It was because I wanted to learn more about what was actually in the Bible. I knew there was a danger in piecing together parts of the Bible or highlighting phrases to prove a point. In seminary I was determined to get a better understanding of the Bible as a whole.

Which is why Karina and I were checking out Proverbs together in the first place. I was taking a class on the Writings of the Old Testament by Dr. John Goldingay. [[This article is adapted from coursework for Dr. John Goldingay, OT 504: The Writings, Fuller Theological Seminary, Pasadena, CA, Winter 2008.]] The “Writing Books” are Psalms, Job, Proverbs, Ruth, Song of Songs, Ecclesiastes, Lamentations, Esther, Daniel, Ezra-Nehemiah, and Chronicles; a beautiful section of the Old Testament that includes wisdom, poetry and narrative.

Karina was a part of my “city council,” a small group of urban youth who were willing to join me on my seminary adventure. I had promised to keep their perspectives in mind while I was in the classroom, and they were willing to offer me input on how what I was learning affected them.

As we explored the Old Testament, we encountered parts of scripture that were hard to explain. Reading opposing messages helped me understand the impulse to simplify, ignore, and edit what is found in the Biblical text. We found that the truth is often complicated. Throughout the course, my driving question became, “How do I let the text speak instead of trying to get it to say what I want it to say?”

Identifying Tensions in the Writings

Many of my assumptions about how God interacts with the world and individuals—including myself—were challenged as my eyes were opened to the complex ways God’s being and work are described. In the Writings, God plays different roles. At times God seems to be clearly orchestrating what is going on in the world (Daniel’s visions), while other times God is not even mentioned or obviously involved (Esther). Some parts focus on how God is going to work things out in the end (Daniel’s visions) and others focus on how God is present and needs to be worshiped right now (Chronicles).

God interacts with individuals in a variety of ways in the Writings. The Writings show God responding to the faithful (Nehemiah, Chronicles, Daniel, Psalms), but also seems to work through coincidences (Esther, Ruth, Daniel). God sometimes reveals hidden things (Daniel’s stories), and in other cases does not reveal the things a person really wants to know (Job and Ecclesiastes). In some instances God responds to prayers of lament (Job and Psalms), and other times he does not (Ecclesiastes and Psalms).

The Writings offer warnings about sex (Proverbs), and are also enthusiastic about sex (Song of Songs). We are taught that God wants us to live differently than others in the world (Ezra-Nehemiah), and also that God likes life and worldly things (Proverbs and Song of Songs). The Writings show God’s people are to be separate from others (Nehemiah), and that outsiders are welcomed into God’s people (Ruth).

Through the Writings we are encouraged to interact with God in the midst of our various experiences as humans. The Writings offer us vocabulary for worship and praise, but also of lament. At times we are to acknowledge that we are guilty, and in other moments we insist to God we have been faithful. We are shown lessons for life, but also that living this way is not a promise that it will all work out for us. [[David Alan Hubbard on Wisdom: “Proverbs says, ‘These are the rules for life; try them and you will find that they work.’ Job and Ecclesiastes say, ‘We did and they don’t.’” David A. Hubbard, "The Wisdom Movement and Israel's Covenant Faith," TynBul 17 (1966), 6.]]

As I explored these tensions in the Writings, I learned to read every word and look at what the text actually says. By exploring the parts of the Bible I was less familiar with, I was able to see that God is bigger than any one sentence or paragraph or even book – that if God could be pinpointed, he wouldn’t be God. The Writings show us that.

Thourgh the Lenses of Urban Youth

By reading Scripture together with Karina, I was able to borrow her eyes in order to see the text in a new way. I asked Karina to read Ecclesiastes and the beginning of Proverbs and to tell me what rap songs it reminded her of. We had an interesting conversation about how Lupe Fiasco’s song “The Cool” was like Proverbs and Kanye West’s song “All Falls Down” was like the book of Ecclesiastes.

The chorus of Fiasco’s song says,

This chorus reminded us of the speech that “wisdom” makes in Proverbs 1:20-33. Wisdom is saying that if people do not listen to her, she will laugh at their calamity and mock them when terror comes (1:26).

I asked Karina what she thought Fiasco meant by “chasing the cool.” She said, “I think he means, you know ‘chasing the cool,’ it’s hard to explain. You’re chasing a lifestyle that looks cool to your friends, but it’s really not. A certain lifestyle that a lot of people in urban areas, I don’t want to say embrace, but have come to accept.”

Then I asked her if she thought Christians have a “cool” that they’re chasing. “Yeah,” she said, “same thing in the complete opposite direction. Same concept. You’re chasing a way you want to be seen. Chasing a lifestyle because you want to be perceived a certain way by others.” In some ways, people can chase after “wisdom” described in Proverbs in the same way that Fiasco observes people chasing the “cool.” Perhaps the wisdom chasers also settle for an appearance of a lifestyle as well.

In this experiment, Karina knew the music and I knew the Scripture. We both were teacher and student. She helped me see the passages from a completely different perspective, which offered new insights into the Biblical text.

Young people need help seeing the Biblical text all together instead of in pieces and parts. In my course I was studying the Old Testament Writings, but the same lessons can be learned in reading the whole Bible. Reading the Bible as a whole affirms the entire spectrum of the human experience.

We will always bring our unique perspectives and biases to our readings of the Biblical text. We cannot help but read it from a personal standpoint, but at the same time there are ways we can avoid letting that control our understanding of what the text says. We can seek to read the scriptures broadly and deeply, taking care not to hover over our favorite parts. We can also seek out the perspectives of others who will emphasize and explore parts that we alone cannot see. As late Fuller professor Dr. Ray Anderson once told me, “Wholeness is stronger than the strongest part.” 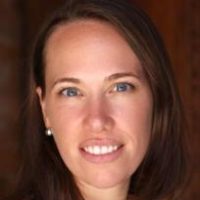 Kimberly Williams is the Executive Director of the Good Shepherd Volunteers, a Catholic volunteer program that supports recent college graduates to live in community, explore their faith, learn about simple living, and serve in social service agencies domestically and internationally. She has been involved with urban ministry for over twenty years in Newark, NJ, Oakland, CA, Los Angeles, CA, and Washington, DC. She has worked in the fields of addiction, homelessness, education, and volunteer support. Kimberly holds two masters degrees from Fuller Seminary. The concentration of her Masters of Theology degree was self-care for urban workers and her Masters in Intercultural Studies degree explored the connections between pastors and hip hop DJs. She is passionate about building bridges between communities, insightful conversations, puns, and good chocolate.