Neighboring well as an ethnic-specific church

Neighboring well as an ethnic-specific church

Navigating multicultural ministry is often easier to conceptualize theoretically than it is to live out in reality.

I grew up in a Filipino American church. Later, as a seminary graduate, I was invited to participate in a program that focused on funding and training urban youth pastors in ethnic churches. I thought it was a fantastic opportunity not only to reach more Filipino American families in the area, but also to reach multicultural neighbors as well. I approached my home church about this exciting opportunity. Part of the stipulation for receiving project funding was a commitment to do outreach in the local community. After a few conversations explaining the program (and the requirement to include outreach ministry), the Filipino pastor decided to stay focused on who was already part of the church.

As disappointed as I might have been, I also understood the pastor’s decision. For a small Asian American church, the idea of engaging with the world outside of the church can be daunting. There are enough considerations that must be made for the first-generation immigrant families as they navigate language, culture, social structures, job searches, and family dynamics. For ethnic groups, the church can be a refuge of familiarity that a person of color needs in a community where they are often the minority. For Asian immigrants specifically, a common thread of feeling powerless in a white-dominant culture can be assuaged in church, where they are part the norm and where their cultural values and practices are not continually questioned.

The idea of venturing back out of the walls of the church may not be perceived as evangelism, but instead as becoming vulnerable again to operating in marginalized spaces. Of course, this is not true for every ethnic church, but it is common.

Becoming the best neighbors without risking our identity

When the Fuller Youth Institute studied today’s churches that are growing young as they engage young people well, the research team discovered six core commitments these churches tend to hold in common. One core commitment is for the church to be the best neighbors locally and globally. Following the initial study, FYI invested a year of research listening specifically to Latina, Asian/Asian American, African American and Multiethnic churches. Through this Multicultural Youth Ministry research, immigrant realities nuanced the ways we understood what it means to neighbor well.

The church where I serve in Southern California is currently praying and planning what this kind of engagement would look like in their context. It is a first-generation Chinese church with a small youth-oriented English ministry service. The church hopes to partner with a Spanish-speaking congregation nearby, and they are praying for the right Spanish-speaking church partner—one who has the same desire to build relationships cross-culturally, in the hopes to reach the greater community around them in their city.

This may sound simple enough, but there are a few key considerations a church like this must make before moving forward on an initiative like this in order to continue to minister well to the current congregation. One main consideration both churches have to navigate is how to honor the need for language-specific services while finding ways to create relationships with one another across languages and cultures. This allows for each ethnic group to find a space that feels familiar in terms of language and culture, while encouraging the congregations to seek friendships across cultures. For example, each service could meet in their language and then gather together to share a meal with one another.

Another large consideration is finding a church partner who wants to pursue the same level of outward communal engagement. Other ethnic churches my church has sought out are not yet ready to engage outside of their walls. They are occupied with finding a large enough space to house their own growing ethnic ministries. Their focus is on the need for ethnic churches to establish themselves and their identities before being ready to consider engagement outside of their own church. In other words, they are working to survive first.

This focus on survival is similar to much of the immigrant experience. Survival comes first. Once needs like housing, finances, and identity are better rooted, looking out to help others can be considered. The immigrant church’s need to survive is not one to be criticized. Anyone who has travelled to another country where a different primary language is spoken has likely experienced a small taste of what it is like for immigrants who are having to navigate a new normal with new customs, languages, foods, and laws to learn. Finding a church where a person can speak their mother tongue and eat familiar foods can be an oasis in what otherwise can be a tiring experience of learning how to live in a new country.

Being a good neighbor to the larger community can feel like a compromise to that safe space immigrants need to survive. But it becomes a discipleship issue when a church gives in to the temptation to be too settled and not risk venturing outside because it took so much work just to get to a stable place.

For a small Asian American church, it is important to understand that once its identity has been established, abundance can then be reclaimed. However, even when it is ready, like in the case of the Chinese American church where I serve, there may be other obstacles that make it difficult to navigate efforts to reach out to neighbors, such as language. The hope is that even with these obstacles, the church, no matter what size or limitation, can begin to make small steps of outreach to be good neighbors in the community.

Reframing what it means to be a good neighbor, and finding abundance

Becoming a good neighbor as a small immigrant church may not mean reaching out to the immediate groups outside the physical doors of the church. Instead it may mean being missional in other ways. The strength of ethnic-specific churches is that they offer people familiarity in a new country. One Korean American pastor I spoke with told me about a self-professed nonChristian who started attending his church. As the pastor got to know the new person, he found out that he was in Los Angeles for short-term work. The man came to the church because he was grateful for the homecooked meals they serve after the church service. The free and familiar food, the familiar language and culture of the church, all served as a welcoming space for this visitor. An onramp to a Christ-centered community. For my pastor friend, this was a very missional act. In this case, this pastor identified his church as the place of safety and mission to Korean immigrants and visitors. His neighbors were defined on both a global and local scale.

Neighboring well means caring for the multicultural and layered aspects within the community. It is precisely the familiarity that leads to questions of faith to arise. For smaller Asian American church leaders who are navigating next steps in how to be the best neighbors, here are some considerations:

Abundance cannot be mass-produced. It does not look the same everywhere. What some may consider to be closed-off communities actually may be hubs of missional innovation.

May we have eyes to see what God is doing among our ethno-cultural congregations. My prayer is that churches will continue to find ways of living outside the walls of the church. 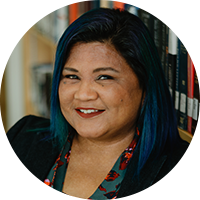 After serving over 20 years in urban youth ministry, Dr. Joyce del Rosario is now an assistant Professor at the Pacific School of Religion in Berkeley, CA. Previously, she was the Executive Director of New Creation Home Ministries, a residential and outreach program for teen moms and an area director for Young Life where she worked with low income and immigrant communities. Joyce also served as a national board member for CCDA. Her favorite activity is sharing delicious food with friends and family