Acknowledging and learning from Indigenous cultures in your ministry

Acknowledging and learning from Indigenous cultures in your ministry

In honor of Indigenous Heritage Month and in an effort to keep learning and represent Indigenous perspectives, I sat down with my friend Joe Gonzales to talk about his faith journey and reflections on youth ministry. Joe is a member of the Rosebud Sioux tribe out of South Dakota, and serves on staff with the Youthfront Neighborhood program in the Argentine neighborhood of Kansas City, where he disciples and learns from young people.

The power of tradition

Can you tell our readers a little bit about yourself?

I was born in North Platte, Nebraska. My mom is Native American. My dad is a third-generation Mexican-American. North Platte, is a White, western-culture town. So I grew up with a sense of identity crisis. I was Native American, I was Mexican, and I was also being taught to be White. But I was a lot closer to my mom's side, which is the Indigenous side. Her family roots go back to the Rosebud Sioux reservation as well as the Navajo reservation in New Mexico.

Growing up we would go up to Mission, South Dakota to visit family all the time. So I got a really good idea of what reservation life was like. A lot of my cousins were also biracial. Even though they were living on the rez, a lot of them had Mexican culture within their families. That actually got them judged on the rez because they weren't fully Native. And growing up in the nineties, even though we knew we were Indigenous, we didn't have any real concept of what that kind of culture was outside of just growing up on the rez. My cousins and I oftentimes would pretend to only be Mexican because we understood that better.

I didn't really understand much about my Indigenous culture until my Uncle Eddie passed away. There was a tradition in my family: when a father died, the oldest son got an eagle feather. It was blessed by a medicine man on the reservation. It carries the spirit of our family and it was just a really sacred thing to get. But Eddie's oldest son had some struggles in his life, and my family didn't feel comfortable giving him that gift. So, as a freshman in high school, I was given the honor of holding this eagle feather, which I still have to this day. I was somebody who was walking a different path. I wasn't falling into drugs and alcohol and my family acknowledged that. I think that was the first time I accepted anything from my family that affirmed my identity as Indigenous.

That gift sounds so meaningful. And it seems that the gesture of being acknowledged gave you a sense of identity and community. Can you tell us more about your personal journey as an Indigenous Christian?

When I became a Christian, it didn't have anything to do with me being Indigenous. It was about being a follower of Christ. I became a Christian in high school. A group of friends just loved me into the church and taught me about Christ. But my discipleship in high school had nothing to do with my culture. It was very much, “You're going to become,” as people taught it, “a White evangelical Christian and follow the path of what a White evangelical Christian does.”

The first time I reconnected with my Indigenous identity was about five years ago. I was a youth pastor and a friend asked if I would speak to her fourth-grade class during Native American History Week at school. I told her, “You probably want someone who knows more of the tradition who knows more of the culture, who really lives that out and would fit the description of what, even I think, a Native American is.” And my friend said, “No, I want you to speak because you are half Indigenous, half Mexican, and I want my kids to see what a Native American looks like today.”

Then, when I was asked to open the Christian Community Development Association (CCDA) conference and give a land acknowledgment, it really set me on a journey of reconnecting with my culture. This is when I learned about boarding schools and the terrible things that happened there. Christians founded and ran these schools. Many of my relatives went through that. I really struggled for a while with reconciling my faith and my Indigenous culture.

But for me, I experienced the love of Jesus in youth group, and that wasn't something that I could burn away. That love affected me and went above even the bad theology that I was taught. So, it was not a faith crisis for me. Instead, I wondered, am I allowed to be an Indigenous Christian? What does that mean? How far can I go into these practices and still be a follower of Christ?

That's something that I’ve been thinking about as I work to reconnect with my Indigenous ancestry. Ultimately, as you mentioned, Christ is a figure who always calls me in. And I have felt that I do want to recover and reconnect not just history and culture, but also very inhabited Indigenous spiritual practices. However, that's not really accepted in the Latina Pentecostal environment where I grew up.

At one point I talked to a counselor at a local Native university as I was working through some things with my own mental health, and mentioned that I was a youth pastor. He said, “You might hear someday that you can't cross pipes.” It means that as an Indigenous person, you can't mix your Indigenous culture with another faith following Christ. You can't follow Christ and also be Indigenous. The counselor flat-out said, “That's not correct.”

He told me a story of a well-known Lakota medicine man who became a Christian pastor and was still respected as a medicine man. No one would've doubted him or his knowledge even as he became a follower of Christ. With that, I understood that I can definitely still live into my culture. I can still practice my culture. The author Richard Twiss, who was Sioux, said the same thing. So I was really grateful to be able to find that and have people affirm who I am.

The ministry of listening

It’s great that you've found those people who affirm you fully and have held safe spaces for you. So, thinking about your youth, what is something you would have found helpful coming from a youth leader or a church community?

One thing I really appreciate about Youthfront is that they have taken the time to listen to my stories. They don’t gaslight me when it comes to my experiences in life. I've experienced that kind of stuff throughout the evangelical church when I've been on staff at different churches. I'm grateful, now, that I have people who listen, encourage, and even help me learn about my own culture.

In high school, I wish that my leaders would've taken the time to do the same—to listen to my story as a person of color. Not to rank-and-file me, but to really take that time to learn about what I've experienced. I’ve had to unlearn a lot of what I learned in youth group. I also value the love they showed me that led me to Christ. I'm always grateful for that. But with the youth that I work with now, I take time to hear stories and learn from them.

Acknowledging culture in our youth ministries

Thinking about that, what are some practical things that youth workers or youth leaders can do to acknowledge and teach themselves, and young people, about Indigenous cultures and issues?

One of the easiest things we can do is research the land that we live and preach on. There are easily accessible websites where you can go learn about original tribes or tribes that were displaced by the government. Understanding that history is a great starting point.

Researching the current issues Indigenous people face is also good. For example, there are so many of our women and children who go missing, and our men as well. They go missing and there isn’t much movement to find them or to understand how systemic issues, or things like sex trafficking, influence the disappearance of Indigenous people.

It's also good to know the local Native networks. That might be a museum. It might be the local Indian Center. You could arrange a meeting to hear more about what they do and the help they need. They'll be the number one voice for Natives in each area. Those are three great ways to begin.

Last question: Is there any other reflection you want to share?

Yes. One of the things I see when we speak about Native Americans is that a lot of people don't realize that Native Americans are still alive. When we think of Native American or Indigenous people, we think of somebody in the history books. We think of somebody who's riding a horse and living off the land, and how that was just a thing of the past. We don't think about Indigenous people and the issues they face today. When I tell somebody I'm Indigenous, a common response is, “Oh yeah, me too. I'm 1/32 Cherokee.” Or, “my great-grandma was Native too.” And I think, “No, I'm Native now.”

That's not necessarily how Natives would look at somebody today. So much about being Native is not about blood quantum but about a way of life. It's about how we take care of the land. It's about how we treat our brothers and sisters. It's about how we honor each other. And I think those are things we find in the Scriptures that are not antagonistic to what Christ wants for us because we're all God's creation in that way.

Tweet this: Taking the time to listen to young people’s stories and experiences can make a world of difference for their faith. Here are 3 ways you can acknowledge and learn from Indigenous cultures in your ministry. 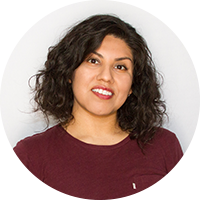 Roslyn Hernández is Project Assistant and Podcast Co-Producer at the Fuller Youth Institute (FYI). She co-produces The FYI on Youth Ministry podcast, and provides a range of support for the LABS and CVDYM research projects. Roslyn lived in México City as a child and grew up in the Central Valley of California. She holds a BA with majors in Film & Media Studies and Spanish, and a minor in Art History from the University of California, Santa Barbara (UCSB), and an MDiv with an emphasis on Youth, Family and Culture from Fuller Theological Seminary. She is passionate about pop culture, culinary traditions, and tea.