Identity matters to all of us.

In our society, who you are and what you stand for matters.

For the Christian, it matters that Jesus Christ is the Son of God, is a Jewish man, and fulfilled the Law and the Prophets. And it matters that as Christians, we live into our identities as new creations (2 Corinthians 5:16-17), as adopted co-heirs (John 1:12, Romans 8:17, Galatians 3:29), and as God’s beloved (Colossians 3:12, 1 Thessalonians 1:4).

For the Gen Zer[1] in your life and those growing into “emerging adulthood,”[2] identity not only matters—identity is complex and complicated. Our pluralistic society and fluid social life have led to a separation from once-intimate communities like family and church. This leaves many feeling alone, lost, and unsettled. Compared to previous generations, today’s young people are trying to figure out who they are and what they really want to do while guarding how they are perceived by others. As a result, identity becomes something they continuously have to curate.

As young people experiment with different ways of being themselves, these “identity nomads”[3] utilize technology to be inclusive. You see, online communities help young people connect with others around shared interests and causes. In an instant, they can learn and copy the latest K-pop dance trend from Seoul, stream and play video games with someone their age from São Paulo, or simply hold a conversation with another student from Johannesburg as they compare lives and cultures. Thus, as they find connection and identity, the friends young people make online may have equal relational footing with friends they have IRL (“in real life”).

As young people become globally connected and open to diversity, a parallel trend has emerged with the exponential growth of Christianity in Africa, Asia, and Latin America. As a youth pastor, the dichotomy that sometimes exists between culture and church can present a challenge when it comes to helping the young people in my life with their questions of identity. However, these journeys to find connection and identity also present opportunities, especially drawing from my own work with my identity as an Asian American Christian.

Churches can learn a lot from people who have lived their entire lives in a bicultural context. Currently, many American churches’ understanding of God comes almost exclusively from the West. Calvinism and Wesleyan-Arminianism are some examples of these theological formulations derived from European cultural backgrounds. But today’s American young people are exposed to diverse cultures and people groups like never before and they have more questions—real questions:

Most US theology tends to lean on the individualistic side. However, many cultures around the globe tend to take a more collectivist approach. This is where theologies centered around communities of color can help, because these theologies speak to the frustrations and grief of navigating identity, especially finding it with one foot in one world, and another foot in another world, while feeling both accepted and rejected by each.

The young people in our lives are asking questions. Lots of questions. When it comes to questions about identity, it’s actually important to look back into the past. God does this dozens of times in the Bible. From Genesis 50:24 to Exodus 3:15 to even Acts 7:32, God is referred to as the God of Abraham, Isaac, and Jacob. Invoking these past names helps God’s people recall who they are, their inherited identity as “children of the promise.”

Similarly, in talking about Asian American identity, Professor Daniel Lee of Fuller Theological Seminary talks about the importance of uncovering your “origin” story as a way to better understand who you are and how you got to be where you are. He lists four approaches for exploring these origins.[4]

This is not a new process. The prophet Moses went through his own “origin story” exploration and navigated these 4 approaches as he examined his tri-cultural life. He spent 40 years of it as the Egyptian Pharoah’s adopted grandson and another 40 years as a refugee with the Midianities after failing to lead a revolt against the very people who raised him, and then another 40 years leading his Hebrew people out of Egypt to the promised land.

How does examining our “origin story” connect with mind, body, and soul? In looking backwards, it helps us understand the present and propels us to move forward. And while we might be used to looking through a Western perspective, an Eastern perspective can help us see a different, nuanced side.

In the West, our minds are trained to be quick to focus on freedom, personal choices, and independence. Young people might ask questions about what they can or cannot do, or whether or not they should do them. They might have questions that lead them to speak their mind at all costs.

In the East, the mind is quicker to focus on relationship, unity, and context of the situation. A young person might ask how their decision affects others in their lives. And they might speak in terms of “We” a lot more than “I.”

These are merely different mindsets and one is not better than the other. But understanding both and encouraging young people to ask questions in these different frameworks can lead them to not just unpack their own origin story, but God’s story as well. Ask students to list questions they have about themselves or about their lives. Help them unpack their origin stories and teach them how to share them, especially as they relate to God’s greater story. For more of a challenge, encourage your young people to learn someone else’s faith story from outside of their faith tradition.

We can remind young people that we’re all created differently, and differences are something to be celebrated. Encourage your students to embrace their individuality. Remind them that all bodies change and all bodies need care. However, remind them also about our physical health and the importance of balancing physical movement with sleep and rest. Lead them to see how physical exhaustion connects to other aspects of our lives, such as our emotions and social connections. Encourage them to see the beauty of the way that their physical characteristics have an “origin story” too, especially tied to family history. For example, one student was told she has her grandmother’s eyes, and it helped her feel connected to a relative who passed away before she was born. Another grew up with thick curly hair whereas the rest of his family had straight wavy hair. He discovered that he’s part Aborigine, and the curly hair occasionally shows up after skipping a generation.

In the West, we often practice three kinds of public prayers. There’s a “call and response” prayer, when one leader prays a line as the congregants respond. There’s a “prayer in unison,” where we pray the same exact words aloud at the same time. And then there’s the “take turns” prayer approach, where different people take turns praying out loud.

A fourth kind of public prayer is historically practiced by Asian and African Christians around the world, but is most often recognized as the Korean 통성 기도 "tongsung gido" (tong-sung ghee-do) prayer. The phrase means to cry out and pray with a loud voice, and in this prayer, often everyone prays out loud at the same time. In order for us to grow more confident in public prayer as Christians, we have to practice it. Tongsung gido removes the pressure from those who don’t know where or how to start when it comes to prayer because everyone is praying out loud. It also helps remove the fear of not saying a polished prayer or the feeling of having the spotlight on them. Invite the young people in your group to try this form of collective prayer in order to help them see how their prayers add and are connected to all the prayers.

Another way to help young people is to demonstrate how prayer can be connected to who they are or what they’re going through. Help them learn prayers of lament—prayers where faithful followers wrestle with doubts or go through despair and difficulty. Teach them prayers of petition and deliverance and intercession, where they not only pray for themselves, but also for someone else. Teach them prayers of contrition and transformation, helping young people to learn more about asking God for forgiveness or for growth in their faith journey.

It especially matters that as youth leaders we empathize and are part of the journey alongside our young people. By helping them uncover their origin stories, we help them understand an aspect of who they are. By helping them see that their mind, body, and soul are holistically connected, we can help them embody a sense of wholeness so that they learn to love all that makes up who they are. This is a gift Asian American Christianity has given me, and a gift that can benefit students from all backgrounds.

Tweet this: When we lead young people to embody a sense of wholeness, they learn to love all that makes up who they are. Read these tips on how Asian American theology can help all young people explore identity.

[2] Emerging adulthood refers to young people aged eighteen to thirty who are legal adults that have yet to achieve traditional markers of adulthood like marriage or career or value system.

[3] McKinsey and Company, a global management consulting firm, refers to Gen Zers using this term because their research points to Gen Zers experimenting with different ways of being themselves. Read more at: https://www.mckinsey.com/industries/consumer-packaged-goods/our-insights/true-gen-generation-z-and-its-implications-for-companies.

Our conversation toolkits are the perfect handbooks for any adult looking to have vibrant conversations with today’s young people. Available exclusively in the FYI bookstore. 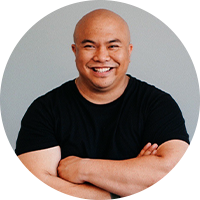 Andy Jung | Oct 13, 2021
3 gifts a coach can give your ministry
Read the Post
Hello, WELCOME TO FYI
Join the community