Selena Quintanilla has always been iconic in my mind—and in countless Latin American households. I grew up listening and dancing to her music. I memorized the lyrics and sang in front of my mirror with a hairbrush in my hands. I still remember the day she died. I was too young to understand everything that happened, but I remember my family talking about it in hushed tones.

When I watched the Selena movie starring Jennifer Lopez, it opened my eyes to Selena’s life in a whole new way. One of my favorite scenes in the movie is when Selena, her dad, and her brother are riding in the van talking about life as Mexican Americans, and the pressures that came along with that. Selena’s dad talks about the racism he experienced growing up and how they must speak both Spanish and English perfectly. They have to be Mexican enough for the Mexicans and American enough for the Americans. “It’s exhausting!” he laments.

I resonated with that statement and the feelings that came along with it. In my case, my family immigrated to the United States from Nicaragua. I was born in Honduras along the way, but came to this country young enough to have no memories of Central America. In my household we spoke mostly Spanish, at school we spoke English. We watched both telenovelas and American sitcoms. I listened to both Top 40 radio and Selena.

I felt like I was always toeing the line between being Latina and being American. I never felt fully a part of either world. Always lacking something.

What is God’s purpose for ethnic identity?

As a teenager I became a Christ-follower, and I began to wonder what God’s purpose for my ethnic identity was. In Genesis 1:27 we read about the imago Dei, the image of God. God creates humanity in God’s own divine image. We all carry the image of God within us, and yet, we are each vastly different. How can that be?

To be made in God’s image means that we each have intrinsic value. We are all equally valued. The fact that we all are so different, though, tells us we also have unique value. Here’s one way to think about this: since we each reflect God’s image and we are all diverse, we each reflect a different aspect of God’s image. It’s when we all come together that we get a fuller picture of who God is.

Your ethnic identity is a part of that. Your language, accent, food, traditions, skin color—they all matter, and they all show us who God is in some way.

The more I studied about God’s intentional design, the more I realized that God hadn’t made a mistake in making me a Latina growing up in the United States. My story—and my ethnic identity—had a purpose. Instead of feeling shame or confusion over my ethnic identity, I felt appreciation. I began to see how my unique experiences could help others gain a new perspective about God and the distinct ways God works in our lives.

As a ministry leader, I believe that exploring young people’s big questions of identity, belonging, and purpose can change teenagers just as much as the answers themselves. Together with my coauthors Kara Powell and Brad Griffin, we’ve written a devotional you can offer to teens in your ministry that invites them to explore, wonder, seek, and wrestle with the questions that are constantly on their mind—questions like, How can my story and identity open my eyes to God’s purpose for me?

If you have young people in your life who are asking big questions about identity, tell them this truth:

If you’ve ever felt shame or confusion over your ethnic identity, remember that when God created you, God wanted the world to see a unique aspect of God’s image in you. No matter what anyone says or thinks, you can be certain that your ethnic identity is important and an intentional part of God’s design.

3 questions to spark conversations with teenagers about their ethnic heritage

Tweet this: Being made in God’s image means that we each have intrinsic value. Here’s one important truth to tell teenagers about God’s intentional design for their ethnic identity.

A new devotional for teenagers grappling with life's biggest questions.

Life’s full of so many questions. But good answers can be hard to come by, especially when you’re a teenager. This book will help teens embrace the 3 big questions underneath the rest, then take next steps in their journey toward faith-filled answers. 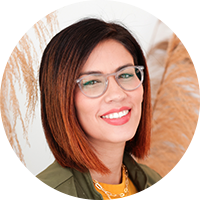 Kristel Acevedo is a wife, mom, and writer. She is the Spiritual Formation Director at Transformation Church where she oversees discipleship pathways and written resources for kids, teens, and adults. She also has a book coming out in December 2022 co-authored with Kara Powell and Brad Griffin.