Fighting discouragement in our ministry volunteers

Fighting discouragement in our ministry volunteers

Every youth ministry leader I know has seen the discouraging side of youth ministry: when the student you’ve been investing in suddenly stops coming to church, or the new Christian falls back into old habits, or the church kid starts sowing some wild oats. It’s easy to sometimes feel like what we’re doing has little lasting value. When even professionals struggle at times to stay motivated and encouraged, it’s certainly easy to understand why many student ministries have a difficult time recruiting and retaining volunteers.

In my more than 15 years of youth ministry, I’ve tried everything I could think of to build and encourage my volunteer team, with varying levels of success. I’ve tried gift cards, text messages, Christmas parties, retreats, words of encouragement, ongoing training, handwritten notes, and public recognition—but I was missing one of the most important aspects to helping people continue to feel encouraged and enlivened by what they’re doing.

A new approach to encouragement

A few years ago, behavioral economist Dan Ariely performed an experiment about work motivation, the findings of which have been transformative in how I encourage my volunteers. In a TED talk which is certainly worth a listen, he and his team brought people in to build Bionicles (little Lego-like structures) one at a time, paying participants for each one they built. As each structure was completed, its builders were asked if they’d like to build another.

Here’s where the experiment shifted. The first group’s creation was taken away, then they were given a new set to build. The second group, however, had to watch their first set get disassembled in front of them—while they were starting on their second build. Later, the first set was given back to the group to build again as their third project. Eventually the second group was just rebuilding the same two sets over and over again.

The first group built an average of eleven Bionicles, while the second group only built an average of seven. Whether or not they enjoyed building the structures had no bearing on when they would quit, which led the researchers to believe that the primary causational factor was how significant the builders perceived their work. Internal motivation was sapped out of those who saw their work destroyed, even if they otherwise enjoyed it.

Seeing and sharing the significance of what we do

In youth ministry, we and our volunteers are constantly seeing our work dismantled in front of us! It doesn’t matter how much someone feels called to the work, how much they enjoy spending time with students, or how necessary they feel youth ministry is—if they see their work being consistently torn down, they’ll soon become demotivated to continue. Dwindling motivation presents itself as burnout, apathy, busyness, or leaving for another ministry altogether. Every youth pastor knows the struggle a revolving door of volunteers can create, and many youth pastors are bordering on burnout themselves.

That’s why we need to look for and magnify the stories of lasting change, significant impact, and worthwhile investment in the lives of students. It’s food for the youth ministry soul. Here are some practical ideas we can put into practice in our ministries starting now!

Tweet: “We need to look for and magnify the stories of lasting change, significant impact, and worthwhile investment in the lives of students. It’s food for the youth ministry soul.”

Now I begin each of our volunteer training lunches by giving my team opportunity to share stories of what God is doing in the students they’re investing in. This alone has been incredibly helpful, giving them a moment to think about and share their joy and victories with the rest of the team. We’re all encouraged by knowing that God is at work and changing lives, so even if it’s not from my group this month, it’s happening and may be from my group next month. Leaders get to see that what they are building has value.

Sometimes it’s hard for youth leaders to even be fully aware of how God has been using them in the lives of their students, so I’ve also started asking students to share those things with their small group leaders, mentors, and shepherds through notes and texts. The impact has been noticeable and significant. Not only has it kept the volunteers motivated and enlivened, it’s also given the students the opportunity to verbalize the spiritual growth and progress taking place in their own lives and thank those helping to make it happen. It’s a win/win!

3. Make space for what matters

Last Sunday we carved out a little space in our large group gathering to ask students to stand and publicly thank their leaders for something specific they’ve done that’s been meaningful. I primed the pump a little by asking a few student leaders to get things started, but then other students jumped in as well.

The feedback I’ve received has been phenomenal. I even got texts from some of the leaders afterwards. One of which said, “Thank you. That makes it all worth it. Just goes to show the small things you do that never get any feedback, that you think are pointless, mean more than you realize. Definitely encouraging.” Her student shared that the texts her leader sends were a constant source of encouragement and made her feel loved and noticed, knowing that someone remembered and cared about her. Without giving the student that opportunity to share, my volunteer would have never known how impactful those texts have been.

Let’s make keeping our volunteers encouraged a huge priority. The more we can close the back door of our leadership teams and create a culture of excited, motivated, engaged, long-term volunteers, the more our ministries will benefit and be primed for more growth, because we’ll be better equipped to minister to more students. Continuing to find value and purpose in what we’re doing is more important than I’d ever previously realized, and I hope it helps you in your ministry as well. 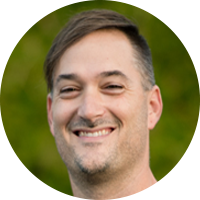 Brandon Hendriks lives in San Clemente, CA where he’s the high school pastor at Pacific Coast Church. A 16 year youth ministry veteran and father of four, Brandon finds relaxation in surfing, snowboarding, camping, spending time at the beach with his family. He received his Master’s Degree in theology from Fuller Theological Seminary in 2017.