The character of discipleship

The character of discipleship

“I don't like dirty humor,” Betty White once said. “I like double entendre, because then the people who get it, enjoy it—and the people who don't get it, don't know about it.”

Irony functions similarly for those who get it and those who don’t.

If words could wink, we’d call it irony. Usually this humor forms harmless inside jokes, but sometimes irony can be problematic.

In youth ministry today, you could say we have an ironic challenge in front of us.

I recently read Anne Snyder’s The Fabric of Character.[1] It’s a book full of case studies on organizations which successfully cultivate virtues like compassion, hope, forgiveness, perseverance, humility, and love in people.

These organizations serve as unique cultural beacons because, as other researchers have noted, the development of character and virtue often feels like a lost art form to the extent that we’ve even begun to lose the language for them.[2] In other words, the terms “character” and “virtue” themselves are gathering the dust of neglect.

So, let’s be clear about terms by drawing from those who study virtue and character.[3] Here are some working definitions we could use:

Said another way, we could think about virtue as a destination, and character as what you learn along the journey.

For example, I don’t remember who won the first Dodger game I attended in Los Angeles, but I do know that I got lost, paid too much for parking and food, and had terrible seats. But after a decade in the city and attending well over fifty Dodger games, I no longer turn on my maps app to get to the stadium. I also know where free parking is, which nights Dodger dogs are $1, how to score the best seats for cheap, and that Dodger fans love to stand up and high five with complete strangers after every home run. If virtue in this analogy is Dodger fandom, character is all the navigational skill I’ve developed over the years to possess this virtue.

Snyder’s work is concerned with virtues of a bit more consequence than my baseball fandom, and covers institutions including schools, halfway homes, community development centers, and even the Scouts. But sadly, none of these organizations are youth ministries, or even churches.

Of all the organizations you would assume to be exemplars of character and virtue development, youth ministries would certainly be near the top of your list. Right?

Now, I watched way too much Game Show Network as a kid and I’ve probably seen at least ten seasons of Family Feud reruns. So, humor me for a second and imagine we’re watching the Feud together.

“We surveyed 100 people on the street about which groups in society best develop the character and virtue of young people. Top five answers on the board.”

Maybe leisure suit-clad Uncle Louis rings in and yells “Scouts!” It’s on the board and the family chooses to play. Then, Aunt Susie, with her Farah Fawcett hairdo, guesses prep schools. It’s also on the board. But after a few answers out of left field from some second cousins thrice removed, the family find themselves with two strikes, and the Wilsons from Tampa Bay are huddled up stage right looking to steal.

At this point, you and I are practically jumping out of our pajamas yelling, “YOUTH MINISTRY! YOUTH MINISTRY!” at the television screen.

But to no avail. Because it’s not there.

In a recent national survey of youth leaders conducted by the Fuller Youth Institute for the Character and Virtue Development in Youth Ministry Project, 77% had positive reactions toward the word “virtue.” What’s more, nearly 90% reacted positively toward the word “character.”

But the same survey asked youth leaders questions about discipleship and found something unsurprising and something very surprising.

First, young people’s discipleship and relationship with God were frequently mentioned as important goals among the youth leaders we surveyed. Unsurprising.

More surprising, however, was that youth leaders provided little to no explanation for how these goals were pursued and rated these goals as some of the least clear and most difficult to pursue. Furthermore, Jesus was only mentioned eleven times alongside the 120 references to discipleship within our survey responses, and very few goals contained any language about developing a young person’s character or virtue.

In other words, we want to see young people emerging out of our youth ministries with strong virtues, but we may not be providing them with tools to help them partner with the Holy Spirit in the cultivation of their character.

Tweet: We want to see young people emerging out of our youth ministries with strong virtues, but we may not be providing them with tools to help them partner with the Holy Spirit in the cultivation of their character.

Linking character and virtue with discipleship

When it comes to the relationship between discipleship and character and virtue development, we don’t want to be the sort of folks who “don’t get it, and don’t know about it.”

What can be done?

The work of psychologist Mark R. McMinn is helpful here. In his 2017 book, The Science of Virtue: Why Positive Psychology Matters to the Church, he writes:

… [P]ositive psychology helps us to reclaim, or redeem, the language of virtue, which has been largely lost in contemporary times … Today we value science, with its intense scrutiny of ‘what is,’ more than virtue, which requires an awareness of who we are to become (teleology). Redeeming virtue requires us to envision a calling, to grasp that we are called to become more fully human, more abundant and Jesus-like.[5]

McMinn thinks positive psychology may give us some building blocks to define discipleship.

First, one of the goals of discipleship may be to “become more fully human, more abundant and Jesus-like.” McMinn is not the first Christian to suggest this. Consider the Apostle Paul’s short-hand definition of discipleship for the church in Corinth. “Follow my example, just as I follow Christ’s” (1 Cor 11:1). Or the Apostle John who writes, “The one who claims to remain in [Jesus] ought to live in the same way as he lived” (1 John 2:6).

The second building block McMinn provides us is guidance for how we and the young people we disciple might become more like Jesus. During the last two decades, researchers in positive psychology have determined methods, called “interventions,” for cultivating these virtues in young people. Beyond simply naming “what is,” the wisdom of positive psychology helps us imagine and practice “what might be.”

In many youth ministry contexts over the past few decades, our discipleship efforts have mainly involved equipping young people with disciplines like daily prayer, Bible reading, and journaling. Coupled together, these practices are often referred to as “quiet time” or “daily devotions.” My youth pastors instilled these disciplines in me over a decade ago and I am so thankful they did, because these practices remain a critical part of my spirituality to this day.

But here’s the rub. The practices that make up my daily quiet time may convict me about the unforgiveness in my life, but they may not provide me with the tools to actually forgive.

However, a forgiveness intervention might give me those tools.

To extend my baseball analogy from above, Roger Kahn has written an evocative memoir about growing up as a Dodger fan called The Boys of Summer.[6] But as immersive as his writing is, it’s no match for actually going to a game (let alone fifty). Kahn’s book may implant a desire for Dodger fandom deep in your heart, but to actually develop the virtue you have to go slap some high fives after a few (or a few hundred) homers. Interventions for compassion, hope, forgiveness, perseverance, humility, and love generally work the same way. They take lots of practice over time.

Now for a bit of good news.

Recently, the Fuller Youth Institute received a grant from the John Templeton Foundation to investigate how we create youth ministry contexts in which virtue and character development can flourish, and how interventions from positive psychology might help. Applying research in character and virtue development to youth ministry may be like the humor of Betty White: the people who “get it, enjoy it.”

So stay tuned for upcoming blog posts and resources which draw more insights from our exciting new project, imagine what this research could mean for discipleship, and maybe give us reason to high five for something even more exciting than home runs.

This post is part of a series presenting findings from the Fuller Youth Institute’s Character and Virtue Development in Youth Ministry project, funded by a planning grant from the John Templeton Foundation. Read our next post from project series here.

[3]A more formal definition of virtue is the “morally good, excellent, or admirable [characteristics of a] person who acts and reacts well, rightly, as she should – she gets things right" in Rosalind Hursthouse, On Virtue Ethics (New York: Oxford University Press, 2002), 13. And of character: “the psychological ingredients – processes or mechanisms – that define the virtues. Said another way, they are distinguishable routes to displaying one or another of the virtues.” in Christopher Peterson and Martin E. P. Seligman, Character Strengths and Virtues: A Handbook and Classification (Washington, DC: American Psychological Association, 2004), xiv. 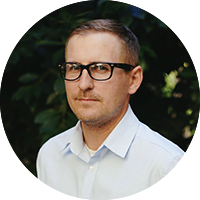 Aaron Yenney is the Project Coordinator for the Character and Virtue Development in Youth Ministry (CVDYM) Project at the Fuller Youth Institute (FYI). He holds a BA in Biblical Studies from Life Pacific College (LPC), and an MAT in Theology from Fuller Theological Seminary. Prior to joining the FYI team, Aaron served for almost a decade at his alma mater where he taught courses in biblical studies and spiritual formation, directed the Academic Resource Center, advised the Multicultural Student Union, and lead urban immersion trips to downtown Los Angeles. Aaron is a big believer in the local church and serves regularly on the preaching team where he attends. In his free time, Aaron is almost always listening to music, enjoys running, reading and writing, spending time with friends and neighbors, and going to as many baseball games as possible.