I sat in the stadium looking around at the thousands of young adults with their hands up, eyes closed, singing worship songs that were unfamiliar to me. What is this? Where am I? I asked myself.

At this evangelical conference in Miami, I was introduced to speakers like Christine Caine and Francis Chan who shared about making the most of your life for God. I want that, I thought. While I had known about Jesus growing up, I became captivated about the idea of doing something big for Jesus—of giving of myself in order to serve and help others. As an angsty young adult, I wanted my life to have real purpose—not unlike many young people today.

In fact today, as part of the research interview team for 3 Big Questions That Change Every Teenager, we’ve found that one of the top drivers for purpose in this generation of young people is their desire to help others.

It wasn’t long after I felt that tug in my own heart that I began searching ministries and churches for opportunities that might help me figure out what my purpose was as a young Christian. But the more I turned to pastors and church leaders, the more I noticed that most only pointed me to the big stories in Scripture—like that of David and Goliath, or the parting of the Red Sea—as an impetus for the reality that we can do extraordinary things for God. While digging into these stories was exciting, it also left me feeling a bit discouraged. What if I don’t ever get to part a sea or beat a giant in battle? What if my life just ends up being ordinary?

Years later, I attended seminary to seek more answers about life and faith and my purpose within all of it. However, I continued to feel discouraged and disconnected from God’s story. The setting that I found myself in was a primarily white, male, evangelical one—and while their perspectives were valuable, I felt like much didn’t resonate with me as a woman from an immigrant family, raised in a city made up primarily of immigrants. Much of what I was learning about God stemmed from a culture and an experience that was far from mine. Where do I fit? I asked myself time and time again.

Searching for that answer led me to reflect on the ways God’s story interacted with mine. And in this, I realized that sometimes, the most meaningful ways God invades our story is not through the big moments—the Goliath moments or the Red Sea moments—but through everyday lived experiences. For me, these moments were most vivid with my abuela, my grandmother, while we spent time in the kitchen preparing a meal for our family, or as she taught me to stick thread through the head of a needle while making clothes for the men and women in our community.

Eventually I began to recognize that my life had meaning because it was a part of a bigger story—one in which God had already been working in my community and in the world.

“Our life stories are shaped by who we are and where we are headed, thus creating yet another junction between the big questions of identity and purpose.” writes Kara Powell in 3 Big Questions. Relationships form our stories because those who have made an impact in our lives become key players.[1] Our lives and our stories thereof—and the characters at play in each of them—are intertwined.

This became more and more real for me as I began leaning into what I like to call an abuelita (grandmother) faith—a faith that is formed and shaped by those who are overlooked and unnamed in our lives and in our world. My grandmother would never be called a “theologian” due to her lack of “formal” education, her socioeconomic or immigrant status, or her gender, among other things. However, I learned through her example that faith and spirituality take form in lived experiences and everyday realities—how we engage with others in meaningful ways as part of God’s greater story. Abuela taught me that, “Our best answer to the question ‘What difference can I make?’ is that our lives matter because we are part of the ongoing plot of what God has done, is doing, and will do in our world.”[2]

My grandmother never parted an ocean or led an army to victory, but the way she engaged with her community reminded me of what really gives our life purpose.

God’s story is big, not because within it are narratives of mountains moving and city walls falling, but because it invites all of humanity to engage in life-giving and purposeful living together, through the life and work of Jesus.

We can help our young people recognize this by pointing them to a faith that is lived and embodied, like that of our abuelitas.

For more on abuelita theology, check out Kat's book Abuelita Faith: What Women on the Margins Teach Us about Wisdom, Persistence, and Strength

Here are 3 “abuelita theologians” in the Bible who can help students find God in the ordinary:

After her sons are unjustly murdered, Rizpah puts her grief on display, placing her body on the line in peaceful protest. Eventually, King David notices, rights some wrongs, and this leads God to end the famine that had enveloped Israel for three years.

Rizpah’s story isn’t typically told and retold, but it’s a simple narrative about the power of a grieving mother, and how God listens and responds to her cries for justice.

In what ways have you seen grief and justice intersect in your life and the lives of your young people, and how have you experienced God work through that?

After Tabitha dies, the disciples call on Peter to resurrect her. At her deathbed, the widows in the community show off the tunics she made for them.

Tabitha’s life and influence in her community was such that Peter was called on to raise her from the dead! Besides Jesus, not many people are resurrected in the New Testament. What’s interesting is that the primary detail we receive about Tabitha’s influence is that she made clothes for the women in her community.

What are some ways that you and the young people in your life can use your seemingly ordinary gifts to influence those in your community?

After God leads the Israelites out of Egypt and through the Red Sea, Miriam takes her timbral and begins dancing before God, leading her people in worship through song and dance. While still in unsure, unfamiliar terrain, Miriam led the Israelites in worship. She didn’t have to have all the answers to hold sacred, embodied and intimate space for God and her community through her timbrels and song.

In what simple but powerful ways can you lead your young people in expressions of joy and gratitude for the things God has done for them?

Tweet this: Can young people find purpose in ordinary, everyday faith? Here are 3 unlikely Bible characters who show them how.

A roadmap to the teenagers in your life

3 Big Questions That Change Every Teenager unlocks landmark research about the most diverse generation in history, what they all have in common, and what that means for you. 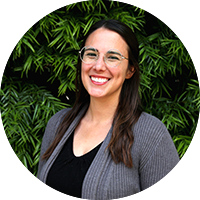 Kat Armas is a Multicultural Project Assistant at the Fuller Youth Institute (FYI), where she helps to ensure that inclusion and equity are tracked across race, gender, and socioeconomic status, particularly as it pertains to FYI's most recent project: the Living a Better Story (LABS) project. She is a Cuban-American from Miami, FL, and holds a BA in Psychology from Florida International University and a dual MDiv and MAT from Fuller Theological Seminary. Kat also works as a freelance writer and host of The Protagonistas podcast. Her work centers the voices of women of color in church leadership and theology (you can check it out at www.katarmas.com). Outside of writing, podcasting and work, Kat enjoys memoirs, day trips down the California coast, vegan foods, and lounging with her husband and two kittens.