Today’s guest blogger is Matthew Lumpkin, an ordained baptist minister and Fuller alum who feels called to work in technology building systems that encourage people to be more human. He teaches an adult Sunday School class at Altadena Baptist Church where he's attended with his wife and two girls for nearly 8 years.

“My cousin is gay but she also loves Jesus, reads her Bible, and goes to church. Can we talk about whether or not that’s even possible?”

I had just asked the class for their burning questions, the ones they’ve always wondered about but didn’t feel they were allowed to ask at church.

To my surprise, over half the class spoke up in agreement with more examples of people from their lives who they know, some they love, who also are living this apparent paradox: gay and Christian. They wanted to understand better how to think about, talk to, and love these people in their lives.

During my time in student ministry and leading this adult Sunday school I’ve tried to make room for these kinds of burning questions. But with some trepidation about this particular topic, I agreed to prepare a series of lessons about gay, lesbian, bi-sexual, transgender, and questioning people (“gay,” for short), the Bible, and the Church.

Can I Ask That? was the first resource I went to because I knew it had a chapter about being gay and being Christian. I also knew that FYI had a reputation for balancing accessibility, good work with biblical texts, and pastoral sensitivity to the real ways these hard questions intersect real people’s lives, especially the lives of students.

Four Things That Surprised Me

Before we began addressing the actual topics, we spent some time describing the kind of conversation we wanted to have. That is, a conversation that was faithful to the character of Jesus. We agreed to speak about gay people as though they were in the room. In several cases we knew they actually were. We agreed not to doubt anyone’s faith or make ultimatums about what one another “had to believe” to still count as a “real” Christian. Along with several guides on owning our own feelings and listening with the same charity with which we want to be heard, these made up our “Agreement of Humility and Respect.” I was convinced we would fail at these, but keeping them posted on the wall enabled us to keep the same kind of conversation as people came and went from week to week. One of the reasons we are afraid to ask divisive questions (especially at church) is that we are afraid of the conversation devolving into opposing camps in battle. The stricter boundaries on the kind of conversation we all agreed we wanted made people feel safer to say riskier things and engage.

2. Praying for and caring for one another enables a different kind of conversation

Perhaps most importantly, we continued our regular practice of beginning our weekly meetings by sharing the ways we believe we’ve seen God at work in our lives that week, and the things we are worried about that we would like one another to remember in prayer. Even when I strongly disagree with your position, if you pray for my sick child, and I pray for your dying mother, it changes how we approach one another. By enacting community and care, we were primed to listen with openness and empathy.

One of the first questions the group wanted to address was: “What does science have to teach us about gay people and gender?” This question was posed by a retired public health nurse. She had some idea about the kinds of genetic disorders that can cause someone with XY (male) chromosomes to never develop secondary sex characteristics or male genitalia.

Accurate numbers of babies born in the US with some ambiguity in their genitalia are hard to come by. The best estimates are between 1 / 1000 and 1 / 500. Another retired nurse in the class who had worked in neonatal intensive care said that number seemed low as compared to her experience. She had seen quite a few babies with ambiguous genitalia and was heartbroken to see how often parents push for surgical revision based on what is visible at birth. We found that talking about making room for kids born between genders in our communities of faith was much easier than talking about “gays” or “lesbians,” especially for folks on the conservative side. It’s hard to blame a baby for how they are born.

The biggest surprise to me was that by making room for these questions and by treating them thoughtfully over a year, we made room for people who weren’t even part of the group to talk about it too. It was almost as if the space that we made in that basement classroom extended beyond it.

Because people knew we were wrestling with this, young people in the church came out to me and to other adults in the church. Adults shared stories of sexual questioning. Parents who had kept their children’s sexual identities quiet felt free to talk about them with me, members of the class, and others at the church more openly.

Regardless of how you feel about the appropriate role of gay people in the church, it’s hard to see it as anything but good that a young person who is experiencing same-sex attraction feels they can remain a part of their community of faith while they work to understand it.

When the answer to “Can I ask that?” is “Yes,” then so is the answer to the question, “Am I welcome here?” And if we do that long enough, with humility and respect, then we make room for the Spirit of God to transform us into something resembling the character of Jesus. 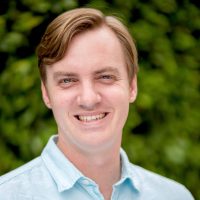 Matt Lumpkin is an ordained baptist minister and Fuller MDiv alum who feels called to work in technology designing systems that encourage people to be more human. Most recently he's collaborated with the Thrive Center for Human Development on CharacterMe, a brain training app for your character. He also designs and builds furniture, writes music for films and paints.