I was rushing to the church building. I had just ended a long shift at work and was speeding to get to youth group on time.

Whenever I stopped at a red light, I would glance over to the passenger seat to read over the jumbled notes I had written on a napkin during my lunch break. My heart felt a sense of relief when I realized I would arrive 15 minutes before students tended to show up. I would have some time to take a deep breath and copy my scrambled notes from my napkin onto a fresh piece of paper. I hurried out of my car and walked as fast as I could so I could open the youth room and finally catch my breath.

To my surprise, there were already two students outside the door.

I could hear their heated conversation as I approached. They were discussing a race-related incident from school that day. All I wanted was 15 minutes to breathe. I said some quick hellos and told them they were welcome to come in while I set up for youth group. They found a seat on one of our couches, and as I was trying to transcribe my notes, I couldn’t help but overhear what they were talking about: A young man had been beaten up at school by a group of peers.

Then I heard one of the students use a racial slur. The hair on the back of my neck stood up. I just wanted 15 minutes to finish prepping my lesson, and yet it felt like the lesson was being written on that hand-me-down couch. I was tired, I had already had a full day, and the last thing I wanted to do was engage in a conversation about racialized violence.

It was not the first time I had encountered a moment like this. I had been paying attention over the past few years to the national conversation about the death of Black men at the hands of local police and the increasing violence toward migrants crossing the border. Stories of racialized violence inundated the news cycle, and soon after, my nightstand. I began to look for resources that could help me understand what was happening. I read books and attended conferences and seminars. While all of it was helpful, none of it was focused on helping me navigate these conversations with young people. I had been given a lot of resources, but when it came to translating my learning to ministry with young people, I was on my own.

That day in the youth room, I chose to show up with what I had. I decided to approach the students and ask more about what had happened. The story was sobering. All they knew to do in that moment was to pick a side, call the other side names, and debate. They didn’t have language to process what had happened.

As hard as it was to shift my attention and engage the conversation, something became clear on the couch that day. Young people are constantly exposed to racial and ethnic diversity. But they don’t have the tools to navigate that diversity well, or interpret it through the eyes of their faith. The best thing I could offer that day was a listening ear.

Our world and the world Jesus knew

According to census data, about two-thirds of all census-counted US Americans today are White. But when you look at those under age 18, that percentage drops to one-half. Projecting ahead to 2060, estimates predict that young people under 18 will be roughly one-third Hispanic, one-third White, and hovering around 10 percent each for African American, Asian American, and multiracial groups. This means the percentage of multiracial young people in particular will double.[1]

Young people today have more opportunities to enter into friendship and relationships with more diverse people than any previous generation. We believe this is something to celebrate! Yet as the adults who accompany young people, we did not always have these same opportunities in our own childhood and adolescence.

Jesus was no stranger to this kind of world.

He was a bilingual, bicultural, border-crossing, brown-skinned Palestinian Jew.[2] He broke all sorts of historic and socially constructed boundaries that had organized people groups as either “insiders” or “outsiders” and invited us into a new way of being the people of God. Jesus took his Jewish background seriously, but chose to extend himself to other cultures, language groups, immigrant communities, and even historically rival religious and political groups. (We will unpack this further in later chapters.)

At the Fuller Youth Institute, we believe these realities are important to God and important for human flourishing. Therefore, they must be important to the church.

In Talking about Race with Teenagers, we set out to write the guide that we wish we’d had when we encountered situations like mine that night at youth group. Throughout this brand new resource you will find explanations of commonly used terms that can be helpful when talking about race, a brief history of this conversation in the United States, and helpful next steps to take in the journey toward developing youth ministries that not only talk about race, but actively promote antiracism. (We’ll also define words like antiracism and how we’re using them.)

Wherever you find yourself, we welcome you into the lifelong work of learning about the dynamics of race in our society. We hope that the next time you feel like all you have to offer teenagers are scribbles on a napkin, you can remember that sometimes our best “sermons” are spontaneous, vulnerable conversations on hand-me-down couches.

Tweet this: Young people don’t always have the tools to navigate diversity well, or interpret it through the eyes of their faith. As ministry leaders, the most important thing we can offer is a listening ear.

[2] Jesus spoke Aramaic, Greek, and Hebrew. (For a quick reference, see “What Language Did Jesus Speak?” Zondervan Academic, https://zondervanacademic.com/blog/what-language-did-jesus-speak.) He frequently crossed borders to engage with others (e.g., his stay in a Samaritan village in John 4). For more on Jesus’ cultural location, see “Jewish Palestine at the Time of Jesus,” Britannica, https://www.britannica.com/biography/Jesus/Jewish-Palestine-at-the-time-of-Jesus. 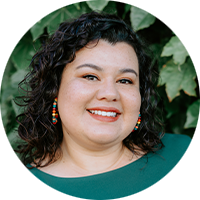