How Improv Comedy Changed How I Do Youth Ministry

How Improv Comedy Changed How I Do Youth Ministry

A lot of times, we as youth leaders feel like we have to say exactly the right thing to students. Have you ever gotten the “You have five seconds to impress me before I check out” vibe? I have. Even with seven years of youth ministry experience, that’s intimidating. We feel like we have a short window to cover all the necessary conversational topics that are important to a student.

How’s school? What’s up with basketball? You have a crush on anyone?

When I first started youth ministry, I would ask questions like these to my students. I remember taking Eric out to lunch for the first time, and I asked him every possible question that I could think of. While those questions may be well intended, to use a phrase from the “improv” comedy world, they are very “agenda-driven.”

I started taking improv classes last year. The biggest insight you learn through improv is the art of developing deep relationships. Improv comedy is funny because of relationships, nothing else. It’s not a funny tag line. It’s not doing something goofy on-stage. It’s simply, relationships. You know how you don’t develop a deep relationship with someone? Asking them a laundry-list of questions that you have already developed in your mind before you meet with them, get a quick response, and then move on to your next question. That’s not a conversation; that’s an agenda.

In improv, we learn about a simple concept. Listening. It’s not rocket science, but it proves to be difficult. Let me give you an example from what I have actually seen in improv:

How’d you do on your Math test son?

That’s too bad, Billy. Hey, what movie do you want to see?

If you’re an audience member watching this scene, you’re probably bored out of your mind. I was bored just writing that. I’m glad that’s over. You’re watching a scene with a dad and son that’s not going anywhere. The dad is going back and forth asking questions and no relationship or depth is developing. He’s ignoring and disregarding the fact that his son failed a test. But the truth is, people do this in improv because they’re not listening. Instead, they have an agenda, which is to find something funny to say. How much different would the scene look if the father leaned in and asked his son about his test and why he failed. We can discover so much depth behind a shallow answer rather than moving on to asking about the movie. That’s the gold in improv. A deep, specific relationship. It’s not about the math test, it’s not about the movie, it’s about the dad and son.

The same applies to our students in ministry. There is more depth available in our conversations with students, but we have to listen and lean in. My improv teacher describes it as dropping your agenda and listening for that one thing that sounds a bit interesting, off, or weird, and then diving in.

Recently, I took out one of my students, Jon, to dinner and asked him one question:

That one question sparked a two-hour long conversation. Why? Because I stayed in it. I invested in his answer and dove in with him to see how I can best walk alongside him. I could have taken his answer and followed up with another question that I thought of ahead of time, but I decided to listen, drop my agenda, and lean in.

Students are waiting to share with someone they trust. But they will only trust someone who will listen to them. And that will build a relationship that lasts. 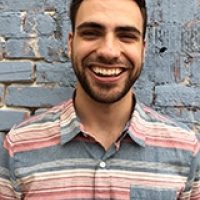 Brian holds a Bachelors degree in Business Administration with an emphasis in Management and Marketing from Loyola Marymount University. Brian manages FYI's ongoing relationships with Cohort churches, plans Sticky Faith events, and develops all marketing and communication initiatives. Outside of FYI, Brian coaches High School Volleyball, performs improv comedy, serves at his church with his wife Christa, and pretty much watches every Dodger game.

Kara Powell | May 24, 2022
Processing the tragedy of school shootings
Read the Post
Hello, WELCOME TO FYI
Join the community