Can I Believe in God and Evolution?

Can I Believe in God and Evolution?

Susan and I were part of a group coming down the mountain from a great day of skiing in Vail. To avoid some horrific traffic, we stopped at a legendary pizza place in Idaho Springs.

Susan (whose name has been changed) and I have known each other for years. She was a student in the middle school ministry I led for a decade, and now she’s twenty-one and graduating at the top of her college engineering class. In many ways she’s a success story.

“I don’t really believe in God anymore, Jim,” Susan said flatly. We had tucked ourselves at the end of the long table because she said she wanted to talk.

Honestly, my first thought in response was about me. Susan was under my care for years. She heard all my talks, went to all our camps, got her hands dirty with me on mission trips and, at the end of it all, found herself not believing any of it. I suddenly felt a huge sense of failure as a youth pastor.

“What made you decide there isn’t a God?” I asked.

“I didn’t say there isn’t a God,” she responded. “I’ve just moved on from what people believe when they’re just kids.”

I thanked her for being so honest with me. Suddenly I felt honored to hear this from her, but also unsatisfied with that answer.

“Please tell me more. Why have you moved on?”

She started to share a handful of sad stories. There was the strict Sunday school teacher who couldn’t appreciate her “spirit.” There was the friend of her parents who unfairly judged her non-Christian friends. There was the time the church fired someone but wasn’t forthright about what happened. All those things were listed as damning evidence against belief in God.

And then there was this:

“It’s time I choose between God and science,” she said. “The Bible’s story of creation is simply unbelievable to me.”

She paused, and looked like she had more to say, but then glanced at me for a response. I took a chance.

“I can’t take back all the dumb things people—including me—have done,” I said. “But I wonder if you’ve painted a wrong picture for yourself on the question of science.”

I spent a minute wondering aloud whether Genesis 1 has to be seen either as an accurate biology textbook or thrown completely aside as fiction. Perhaps there are other alternatives to reading that story.

Her eyes twinkled a little.

“My professors never talked about a middle ground,” she said. “The Bible’s account of creation was always just tossed aside on the basis of evolution.”

“Susan, what if there was room for you to explore whether science could actually support belief in Jesus and in scripture?” I asked.

I’d love to report that Susan was struck to her core and recommitted her life to Jesus, but she didn’t. At least not yet. But I believe she might have taken a tiny step back toward the Lord in that moment. All by having a real conversation that took her doubt seriously.

I left that pizza place thinking about only one real regret: I wish that conversation with Susan had happened years earlier.

Out of experiences like this one, we’ve created a curriculum called Can I Ask That? You can use it with high school students to explore this and other tough questions about God and faith.

We were careful to leave the conversation in your hands rather than force arguments or positions. As one test leader shared, “This curriculum presented a conversational tool to our students, not just cut-and-dried answers.”

We hope you can have conversations with the Susans in your life long before they walk away from God over unexplored doubts.

Learn more about the Can I Ask That? Series 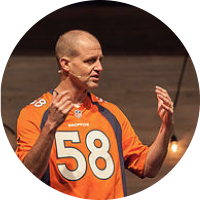