These lyrics from the 1983 song “40” animated the deepest groanings of a generation—or two!—through the music of the band U2.

I (Kara) have actually sung these lyrics live with Bono (well, along with the 40,000 other fans at the concert in the late '80s). The words resonate so deeply because they speak authentically about human experience.

The words are directly from Psalm 40, one of the many lament psalms that articulate these questions and cries in expressions that translate across centuries. But sometimes these words and phrases leave us even more confused.

Eugene Peterson describes reading the psalms as a 12-year-old boy and being utterly perplexed by the language.

But the more heread, the more he was introduced to the power of metaphor, until ultimately the psalms “showed me that imagination was a way to get inside the truth.” Pairing that imagination with Biblical scholarship, eventually Peterson rephrased the psalms—and then the rest of the Bible—into modern language through The Message translation.

The Message translation deeply moved Bono and U2 in the early 2000s, and when Peterson found out about this, his first response was, “Who’s Bono?” 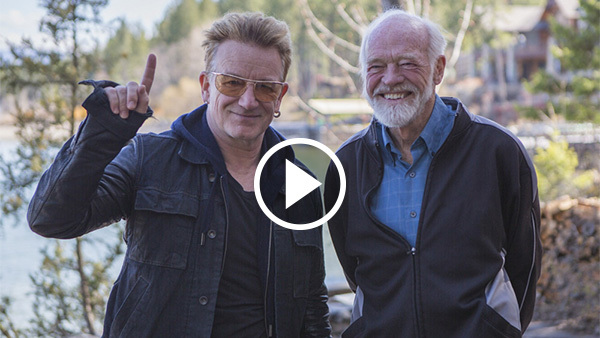 tells the story of how these two imaginative human beings eventually corresponded, developed a friendship, and finally met.

Bono recently paid a visit to the Petersons’ home in Montana. David Taylor, Fuller’s Brehm Center director at our Texas campus, sat down for a chat with both of them in this rare and intimate interview.

They talk about raw emotion, cursing, Scripture, and violence. They wonder together what it looks like to respond to the real world authentically before God. Bono asserts, “The only way we can approach God is if we’re honest—through metaphor, through symbol.” Peterson follows, “Praying isn’t being nice before God . . . The psalms are not pretty; they’re not nice.”

This authenticity about life and prayer has fueled U2’s music across three-and-a-half decades.

Often what draws young people to music is its openness to releasing the full emotion of life. Or as Bono explains, “The truth can blow things apart.” We found in our own research that the vast majority of Christian teenagers have significant questions and doubts about God, but precious few talk to anyone about them. That’s tragic, because it’s not doubt that is toxic to faith, it's silence.

One of the best things we can offer to young people when they struggle is a relationship where they can be honest, raw, and lay everything on the table.

We’re grateful for these two leaders who help all of us crack open the potential of the psalms—for ourselves, and for young people.

We are honored to host the world premiere of a short film with Bono (U2), Eugene Peterson (The Message), and theologian W. David O. Taylor reflecting together on the Psalms, produced by Brehm Texas and Fourth Line Films.

Brad M. Griffin is the Senior Director of Content for the Fuller Youth Institute, where he develops research-based training for youth workers and parents. A speaker, writer, and volunteer youth pastor, Brad is the coauthor of over a dozen books, including 3 Big Questions That Change Every Teenager, Faith in an Anxious World, Growing Young, several Sticky Faith books, Every Parent’s Guide to Navigating Our Digital World, and Can I Ask That? Brad and his family live in Southern California, where he serves as Pastor of Youth and Family Ministries at Mountainside Communion.